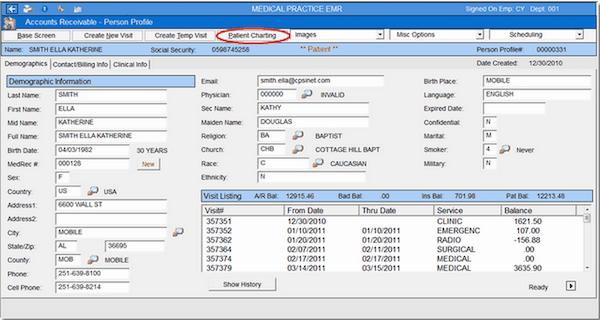 Overall it is effective and good for our clinic.

Ease of use, very easy to navigate through this system. I have used many other systems and find this to be my favorite so far.

I have not found anything that I dislike about CPSI. I find it a great product for the needs of our company.

If you know where the information is located it is easily found and accessible. Also it is very easy to keep a running record.

It is difficult to produce a new form. Lots of steps and a lot of going back and forth between charts.

The system that does not communicate with any other of the most popular hospital platform software systems.

The same eforms can be used in IP and OP settings. The system will allow for faxing straight from the system but the forms have to be set up as such to have the patient's name and demographics on each page and we haven't figured out how to do this yet.

The system is a nursing platform and does not keep up with the requirements of Medicare. It does not track therapy cap, number of visits before g-code update, does not check charges and time related to them before sending on to billing. The eforms are customizable to a point but do not allow for a flow of information without having to build them in step by step. There are no templates available that you can make your own with changes. They have to be built one step at a time with little latitude about what actions you can use.

Evident - Not the easiest to use but it gets the job done.

Evident was easy to use and is one of the better EHR systems out there.

-Front end that everyone sees looks old, unlike competitors who have updated. -Some options and settings seem like they were just placed where ever because it doesn't make sense. -Small bugs that haven't been fixed in years. For instance, checking a box doesn't work when full screen. You need to take it out of full screen check the box then maximize it again.

Avoid at all Costs

I've used this on both the inpatient and outpatient sides. Avoid it like the plague. On the outpatient side, it either lacks common features like online scheduling or a kiosk/tablet mode, or you have to pay extra for them (electronic prescribing, ob templates--even the module to meat meaningful use reporting costs extra!). The scheduling display works on the heisenberg principle-- you can tell what room your patient is in, or how long they've been there, but not both (in fact, it doesn't even tell you what time they checked in, just how long they've been there). The interface is clunky (it takes 8-12 clicks just to refill a med, which is bad because refill requests are BY MED, not patient, so if a patient has several meds, they're on your list several times. Oh, and you can't change the order of most displayed stuff like patients), and doesn't intrinsically support things like macro templates ("dot phrases"), but their built in templates are horrible. Granted, the company customer service is good and will "customize" things, but I would hope that by default an EHR would include things like procedure code entry without having to "customize" it, but it doesnt (on billing, you can't even add modifiers by default!). Likewise, there's no crosswalk for adequate icd-10 specificity coding, or to help capture HCC modifications. If it's in use at a facility where it also serves as inpatient EHR, anything you do in one location will affect the other. So, if the ER starts a patient's med rec fresh (as they should) it will (literally) erase the clinic medication list, so you have to re-match meds when refill requests come in. It is also incredibly buggy. We've had entire days go by where we couldn't complete charts. Their customer service is usually good, and things usually get fixed quickly, but bugs pop up so frequently that we've just gotten used to them, or having to reboot in the middle of charting. If this thing were a medical device, no reasonable person would let it around patients. I think the thing that best represents this software to me is the search icon. Spyglass icon-- click to search, right? Nope. You have to click on a tiny spot to the upper right of the icon, not the icon itself, to get it to work. It has been like that literally FOR YEARS and the fact that it hasn't been fixed makes the developers seem lazy. Oh, and although customer service is usually good, training was abysmal-- the trainer we got could tell us where buttons were, but not how to do a workflow (she didn't even know what a workflow was) or how "other" clinics got around problems. Also, be aware that at some times, the company has "demo'ed" software or features that AREN'T available yet. I'm sure most customers get it "because it's cheap," but that's just not true. Excluding even losses due to decreased efficiency or extra personnel time, there are TONS of better EMRs (at least on the clinic side) that are cheaper than their initial and licensing costs, and by the time you pay more for those features (like meaningful use reporting modules!) that are necessary or expected, you're paying MORE for a system that everyone hates. DO NOT buy this just because it's cheap or you're used to their other products. Do a proper head to head vetting against other options and you'll likely see that you are probably better served getting something else.

Customer service is great. Which is good, because you'll be using them a lot based on how buggy it is

Slow and unreliable. Lacks a lot of features, or you have to pay extra. Built on "episodes," not an intuitive narrative, so it's hard to see the whole of a patient's history without clicking through multiple layers of interface