SCORM vs. AICC vs. Tin Can (xAPI): Why xAPI Is the Only Way Forward

Picking a technical standard for your company’s eLearning content is an important decision, and one that in almost all cases will come down to the three most widely used options—SCORM, AICC and Tin Can (also known as Experience API, or xAPI).

This decision shouldn’t be taken lightly. Not only do you need to pick a standard that will support everything your small or midsize business (SMB) wants to do with its employee training courses now and in the future, but you also need to make sure it runs seamlessly with your learning management system (LMS).

There are larger market trends to consider, as well. Anyone who went all-in on Betamax instead of VHS can tell you that betting on the wrong horse has consequences. Choosing a standard that falls out of favor with content creators and LMS vendors will result in high course production and reformatting costs down the line.

Given all of these factors, which technical standard should you go with?

We think the answer is clear. SMBs should adopt xAPI over SCORM or AICC because it’s more flexible, has a longer shelf life with software providers and supports more complex learning experiences.

In this article, we’ll break down the differences between the three popular technical standards, explain why xAPI is the best option and end with tips on how to adopt it successfully.

SCORM: The Limited Leader
AICC: The Defunct Dinosaur
Tin Can (xAPI): The Promising Prodigy
3 Tips for Adopting xAPI From Its Creator

What is SCORM?
Sharable Content Object Reference Model, or SCORM, is a set of technical standards created by the U.S. government’s Advanced Distributed Learning (ADL) research program back in 2000 to address the issues at the time with its predecessor, AICC.

The three components of SCORM

How popular is SCORM?
SCORM 1.0 and 1.1 didn’t last long, but its two subsequent versions—SCORM 1.2 and SCORM 2004—have become the most popular technical standards in the eLearning industry.

Our own research confirms this:

Why is SCORM so popular? According to our survey results, the top reasons are SCORM’s LMS compatibility and, more simply, it’s the standard they’ve always used. What are SCORM’s strengths?
If you want to create a simple working eLearning course or have a wealth of pre-made content to choose from, it’s hard to beat SCORM as a technical standard. Here are some of its strengths:

What are SCORM’s weaknesses?
The latest version of SCORM (SCORM 2004, 4th edition) was released in March 2009. That means it’s been almost a decade since SCORM was last updated, and it shows in a number of key areas:

Final verdict: SCORM is a great option if you’re looking for a technical standard to get up and running quickly, but adopters need to be aware that SCORM has severe limitations that will only grow more painful with time. It’s a competent but bare minimum solution that will hinder any SMB’s efforts to create more interactive and engaging courses in the future.

What is AICC?
“AICC” isn’t an acronym for a technical standard, but rather the group behind its creation: the Aviation Industry Computer-Based Training Committee. In 1988, the AICC was formed by Boeing, Airbus and McDonnell Douglas to standardize the training materials and technology used to train airline workers.

In 1993, the AICC produced the first ever technical specification for LMSs, designed for CD-ROM and LAN-based training. A web interface called AICC HACP was added in 1998, enterprises outside the airline industry caught on, and the rest, as they say, is history.

AICC uses HTML forms and simple text strings to transmit information back-and-forth between the course content and the LMS.

How popular is AICC?
Despite its age, AICC is still the second most widely used technical standard in corporate training behind SCORM:

Like SCORM, when we asked users why they use AICC, most respondents said it’s because of its LMS compatibility: 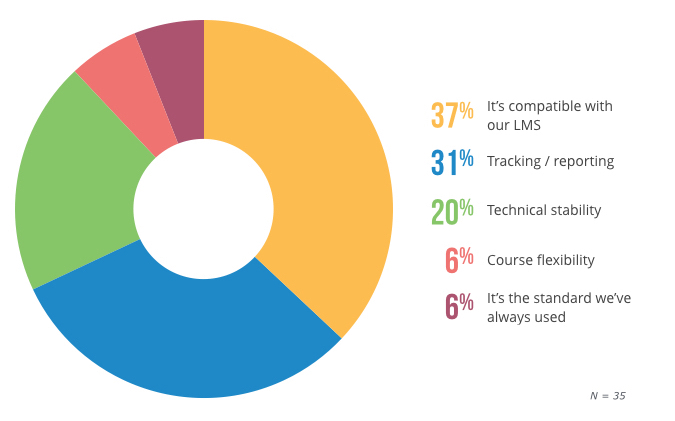 What are AICC’s strengths?
Is there anything that the ancient AICC can do better than the newer standards that have followed? Overall, no, not really. But there is one area where AICC has an advantage:

Final verdict: The only place AICC should be researched at this point is in the history books. Support for AICC is waning, and there’s simply no reason SMBs should be adopting this outdated standard when there are newer, better options available.

Tin Can (xAPI): The Promising Prodigy

What is xAPI?
In 2011, the ADL research group of the U.S. government recognized there was a need for a more robust eLearning specification. They issued a request for proposals, and the project (nicknamed “Project Tin Can”) was awarded to SCORM experts Rustici Software.

Developed jointly by the ADL, Rustici Software and many others, Project Tin Can released The Experience API (xAPI) in 2013.

The Experience API works by defining learning activities using “noun, verb, object” statements (e.g., “Brian completed an assessment.”). When a user performs a learning activity, the xAPI activity statement is recorded and stored in what’s called a learning record store (LRS). An LRS can exist by itself (e.g., Watershed LRS) or within an LMS (e.g., Litmos). How Tin Can (xAPI) works

How popular is xAPI?
xAPI hasn’t caught on because it’s still relatively new. That reflects in our survey findings, where xAPI was the least adopted standard among the big three:

The users that have adopted xAPI have good things to say. Most say they chose it for its tracking and reporting capabilities and its flexibility in course creation. What are xAPI’s strengths?
The reason it’s called the Experience API is because it was built to support and track learner experiences whenever and wherever they happen. That ability, along with xAPI’s more modern architecture, gives it a number of strengths over other options:

What are xAPI’s weaknesses?
If Tin Can has any weakness compared to the other standards, it’s this:

Final verdict: Though it hasn’t reached widespread adoption yet, xAPI is the only standard that can support the future of eLearning.

Not only is it able to deliver more complex and varied learning scenarios that better engage workers, but it also gives trainers the detailed interaction data they need to improve courses over time.

Any SMB that claims to take employee learning and development seriously needs to adopt xAPI as their technical standard.

3 Tips for Adopting xAPI From Its Creator

The LMS market is booming (it’s expected to reach over $15 billion globally by 2023), and overall spending on employee training is climbing year after year. More and more SMBs are prioritizing worker learning and development.

If you’re in this group, you’re setting your company up for success. But if all of your money and effort is going towards creating the same mundane SCORM and AICC courses of today, instead of the xAPI courses of tomorrow, you’re missing the point. Founder and CEO of Watershed LRS, co-creator of Experience API

“Standards define and confine an industry. As long as people are just satisfied with pushing out eLearning in the current page-turning, put-you-to-sleep format that it’s in right now, there’s no incentive to move beyond SCORM.

“It’s not just the technological shift that’s going to move the world to xAPI, it’s this philosophical shift. It’s people becoming dissatisfied with the status quo and realizing that they can do something beyond the status quo.”

We can help with that last bit. Below are links to top LMS vendors from our FrontRunners for Learning Management that are listed as adopters by xAPI. Click on a product to learn more:

Find an LMS That Best Fits Your Needs
Compare Software Filling the 5 Biggest Gaps in Your LMS Business Case 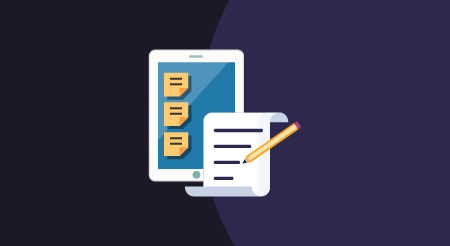 Find an LMS That Best Fits Your Needs